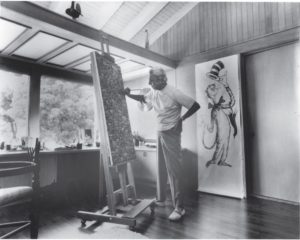 The Secret Art of Dr. Seuss

We all know and love famous children’s book author Dr.Seuss! If you grew up reading the books, you know the whimsical style that we have come to love. What you might not know is that Theodor Seuss Geisel was also a fine artist! Ted illustrated children’s books by day and spent his nights creating what he called his “midnight paintings”. His limited edition artworks are available for sale at select galleries -and wow are they amazing.

Ted never sold his works during his lifetime. He felt that it would distract from his career as a children’s book author. He also had an interesting time considering himself a fine artist at times. After his death in 1991, his home shared with wife Audrey, contained hundreds of drawings, paintings, and taxidermy sculptures.

Following Geisel’s death, Audrey donated many of his drawings to the University of California, San Diego. In 1996 art dealer Robert Chase approached her with the idea to release limited edition reproductions Seuss’s work. “The Art of Dr. Seuss Collection” officially launched in 1998 following a preview of the collection in 1997. In that preview, a small number of editions released annually for collectors.

“I remember telling Ted that there would come a day when many of his paintings would be seen and he would thus share with his fans another facet of himself—his private self.”

The Meaning Behind the Work

Many of the paintings include political commentary, sexual innuendos, and just generally not the G-rated wholesomeness we have come to expect from the Seuss name. This really is the draw for a lot of collectors – after all, Ted was a man living in this world (as well as his Seussian world) with opinions to be shared! He actually got his start with cartoon drawings in newspapers, focusing primarily on political satire. His earlier advertising illustrations in the 1920’s & 30’s eventually led him to a stint as a political cartoonist in 1941 during World War II. He even joined the army in 1943 as a scriptwriter for a filmmaking unit that documented the war. 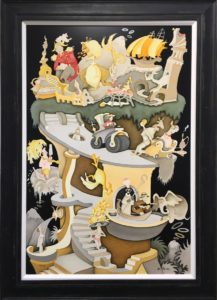 While Ted hid his midnight paintings from the world, he also had some fun with them! He hung one of his  paintings in his home, “Green Cat With Lights” and signed it with pseudonym, Stroogo Von M; pretending that he had discovered a new artist. Ted would talk about it at dinner parties to gauge what other people truly thought about his work. According to his wife Audrey “On at least one occasion, a guest replied, ‘Oh yes, I’ve heard of Stroogo Von M.’” 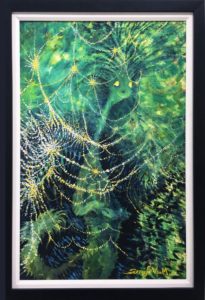 The collection from Chase art group currently available for sale includes illustrations, midnight paintings, and what he called his “unorthodox taxidermy.” These sculptures are mounted creature heads that Geisel created with papier-mâché. The original beaks, horns, antlers, etc. were from real deceased animals from the Springfield Zoo in Massachusetts where his father worked. The reproductions of course are cast and include no real animal elements.

Ted’s children’s books and literary rhymes made him a sensation, but his uniquely styled animals and figures have cemented themselves as distinctly Seussian. Rest assured that his Secret Art maintains that same whimsical charm. And when you think about it, his work was always immensely conceptual. Sneetches and Yertle the Turtle explain discrimination and fascism, while The Lorax advocates to preserve the environment. Hoping that generations to come will continue to enjoy the genius that was Theodor Seuss Geisel.