The Art of Neon

Is Neon Art a trend? 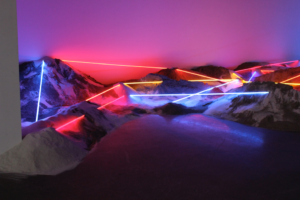 Has anyone else noticed this obsession with neon lately? Not only with interior design, but with fine art as well! The fluorescent neon lighting trend has come a long way since its affiliation with smoke filled bars and strip clubs. It has been creeping back into the artworld for the last several years and the evidence is everywhere.

Sir William Ramsay and Morris Travers discovered neon by accident in 1898 while experimenting on liquid air. Georges Claude began creating neon lighting in 1902, as he had surplus neon leftover as a byproduct of his air liquefaction company. Neon lighting consists of brightly glowing, electrified glass tubes or bulbs that contain rarefied neon or other gases. Neon lights are a type of cold cathode gas-discharge light. A neon tube is a sealed glass tube with a metal electrode at each end, filled with one of a number of gases at low pressure

Not all neon lights are neon, in fact only one color of ‘neon’ is actually neon! The color of the light depends on the gas within the tube. Neon lights were named for neon, a noble gas which gives off a popular orange light, but other gases and chemicals are used to produce other colors, such as hydrogen (red), helium (yellow), carbon dioxide (white), and mercury (blue). Various combinations have been created over the years, creating some of our favorites (the pinks and purples!) that we have come to love today. 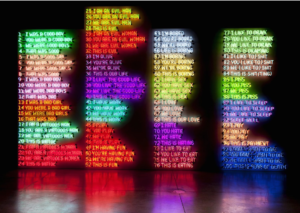 Did you know there is a museum of neon art? MONA is an institution that exists to encourage learning and curiosity through the preservation, collection, and interpretation of neon art! They have hosted several notable Exhibitions in the last several years. She Bends: Women in Neon was a group art show featuring women benders from around the world and was curated by Meryl Pataky.

Though neon, and neon in art is not new it has been popping up all over lately! Not only do we personally follow several artists who have moved into neon as a medium in the last several years – notable exhibitions and art contests have been booming with the stuff!

The winner of the $200,000 Grand ARTPRIZE in Grand Rapids, MI went to “brown, carmine, and blue.” by Le’Andra LeSeur. LeSeur’s “brown, carmine, and blue” utilizes visual media (including several neon elements), installation and performance to make sense of the way current ideologies frame marginalized identities. “Le’Andra so compellingly utilizes all of her resources to take us into her world and her worldview. Her work was so deeply immersive. It’s about gender, it’s about race, it’s about America at its core,” said Davis Anderson, an ArtPrize 10 juror and the Edna S. Tuttleman Director of the Museum at PAFA. 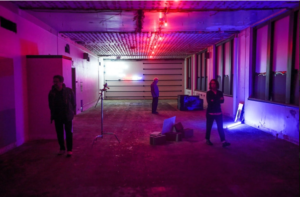 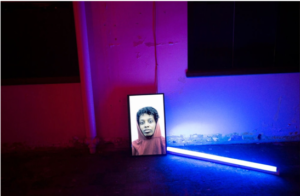 Alex Da Corte’s Rubber Pencil Devil was featured at The 2018 Carnegie International, that opened on October 13th. The Philadelphia-based artist displays a skeletonof a house covered in neon with flower plantings, jack-o’-lanterns, cupids, etc. Inside, 57 magnetic music videos play (Over the course of three hours), each with pop-culture references. Da Corte stars as most of the characters in the videos. A giant Heinz bottle is jumps around, The Wicked Witch of the West is sings LeAnne Rimes accompanied by Oscar the Grouch, Bugs Bunny is sits on a cartoon crescent moon, singing Frank Ocean.

Then, as ambient music plays, Da Corte walks slowly through the door of a familiar-looking set. He’s dressed as Mister Rogers (who shot his children’s TV show nearby), wearing one of his brightly colored sweaters, smiling warmly to the camera and sitting down to change his shoes. Pretty soon he’s out the door, returning a moment later in a different sweater, switching his shoes once more and departing.

He does it again and again, arriving each time in a new sweater and with the same joyful hello to the audience. It’s by turns hilarious and sad, and more than a little dark, but as he keeps going, something else happens: it begins to have the feel of an epic. It’s moving—heroic, even. He strives to get the job done as well as he can. Like us all, he’s putting on his best face, trying to get through the day. 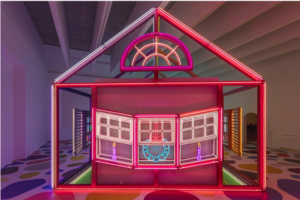 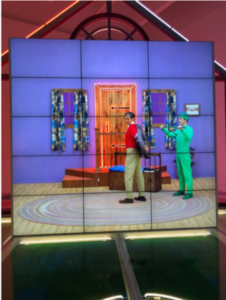 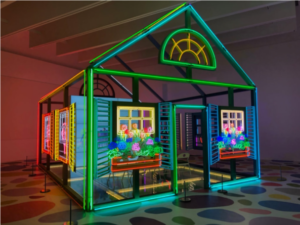 We seriously can’t get enough of this work! Fingers crossed we can make some magic happen and go experience it for ourselves. Not only is it stunningly beautiful, but it resonates this strange, intriguing Americana nostalgia. In fact, only one week after opening, the work has already been widely praised. Popular art hub Artsy recently published “The Carnegie International Puts Joy before Politics”. Everyone is eating up the light-heartedness of this neon structure. Whether it be the candy-colored films, or pop culture references such as Mr. Rogers, something about it makes you smile!

We hope this trend sticks around for years to come! It is candy to our eyes and – we are oohing and aahing over this art trend.